The Presiding Archbishop (Presiding Bishop) of The LCC
The Most Reverend William H. Downey 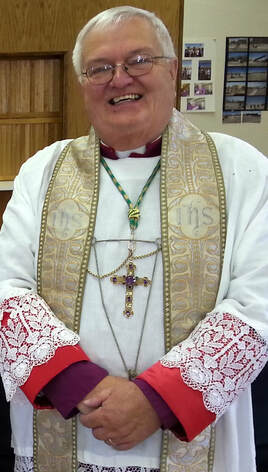 ​William Sydney Harry Downey, born May 18, 1945 to Kathryn Cumberledge Downey and William F. Downey in Elizabeth New Jersey the second of two children. He was baptized and confirmed in the Episcopal Church.

Bp. Downey spent the first eighteen years of his life in New Jersey having graduated form Alma Preparatory School in South Bound Brook, N.J. He did undergraduate studies at White College and Zarapath Seminary. He graduated from Miracle Valley Bible College in Arizona.

From an early age, Abp Downey found himself most interested in religious and esoteric subjects, and he spent many hours reading and researching related studies.  He spent a few years exploring Evangelical Christianity as well as non-Christian religions such as Buddhism , Hinduism, and related disciplines of meditation and Yoga.  As is the case with many spiritual seekers he wandered through many divergent paths, e.g. Spiritualism, New Thought, and Theosophy.

When he moved to California in the sixties, he came across The Liberal Catholic Church, and as soon as he experienced worship through TheLCC Liturgy, he realized that he had found his spiritual home, or perhaps as he should say,  “I ‘came home.’”   Abp Downey was baptized and confirmed sub-conditione by Bishop Edward Matthews, who at that time was separated from the church having been involved in a schism of the LCC in America that occurred in 1947.

He was ordained to the priesthood in September 1972 by Bishop Matthews.  Happily, Bishop Matthews and most of his clergy were reconciled to the Worldwide Liberal Catholic Church in 1976 and we were welcomed into full participation in the Province of the United States of America under the Regionary Bishop Gerrit Munnik .  Abp served with Bishop Munnik until his passing in 1992.

In 1985, Abp married his beloved wife Anita Martin in Pune, Maharashtra India. She has been and continues to be his help, his inspiration, and his friend.  His beloved daughter Kathryn was born in 1988.

Abp Downey has served as a priest at the Church of Our Lady and All Angels since that time.  In nineteen ninety six, he attended The General Episcopal Synod in Sydney Australia as an observer. He had the privilege of meeting many clergy and faithful of the Church both from Australia and from all over the World.

Abp Downey was elected to the Episcopacy of The Liberal Catholic Church and consecrated in May 24, 1997 by Bishop Lawrence J Smith, assisted by Bishops Robert McGinnis, Hein VanBeusekom, and Ruben Cabigting. In 2000, he was elected Regionary Bishop for the Province of the United States of America and has served in that office since then, as well as having been a member of the Interim Committee of the Church since that time.

Abp Downey served on a few Boards of Directors over the years such as the California Association of Recovery Homes, The Ventura County Humane Society, and the Rogers Cooper Memorial Trust Foundation.

Abp Downey is a Freemason and is involved both at Blue Lodge level, as well as in York Rite bodies.  He served as Grand Chaplain of the Royal Arch Grand Lodge of California.  He was recently invited to membership in Societas Rosicruciana in Civitatibus Foederatis .

Abp Downey is the proud Grandpa of three lovely grand daughters, Sydney, Regan and Phoebe  whom he is blessed to see every day .  Abp Downey and his wife, Anita, also share their home with six canine Children.

Abp Downey writes that “It is my honor and privilege to be elected as Presiding Arch Bishop of the Liberal  Catholic Church and I am humbled by this honor. In many ways I feel inadequate to the task before me and certainly less qualified than many of my formidable predecessors in office .  To follow in the footsteps of such great leaders as JIW, CWL, Frank Pigott, Adriaan Vreede and Sten VonKrusenstierna is almost overwhelming. I pray by the help and grace of God to follow those footsteps even if I may not fill their shoes.

“The work that lies before us is to continue to ‘forward the work of Our Master, Christ in the World and to feed His flock...to serve as a vehicle for the eternal Christ,’ to serve Him in whose service is perfect freedom and to do it in such a manner that it is meaningful and relevant in the World today.  In the words of the Collect for Advent Sunday ‘that we may hasten the coming of Thy kingdom upon earth.’”